Under Mrs. Reynolds ownership, the house at 48 Spruce Street was known as ‘The Reynolds’ boardinghouse. It had glowing advertisements in local and tourist information booklets and was a successful business until Mrs. Reynolds’ death in July 1900. The house was then purchased by a couple from Kentucky, Reverend Thomas M. Myers and his wife Mary.

The Myers renamed the boarding house, ‘Old Kentucky Home’ and owned the business for six years. During his time the Old Kentucky Home was operated by several proprietors. It was sold to Mrs. Julia Wolfe in August 1906. Thomas Wolfe later wrote about Reverend Myer’s as the ‘Reverend Wellington Hodge’ in Look Homeward, Angel.

“Its owner was a middle-aged horse-faced gentleman whose name was the Reverend Wellington Hodge: he had begun life favorably in Altamont as a Methodist minister, but had run foul of trouble when he began to do double service to the Lord God of Hosts and John Barleycorn.” Look Homeward, Angel 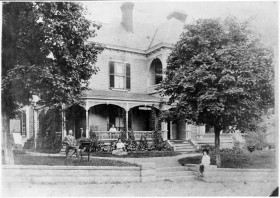 After considering a few other possible boardinghouses in Asheville, Mrs. Wolfe learned that the Old Kentucky home was for sale. Mrs. Wolfe appreciated the fact it was only two blocks from the family home, and, after a visit with Mrs. Myers, approached her husband about the purchase. W.O. Wolfe resigned to his wife’s desire to be a businesswomen agreed to the purchase.

“Jack, she wants it. Make the papers out to her. If she is satisfied, I don’t care.”
Marble Man’s Wife

The boardinghouse came with 19 boarders, paying $8.00 a week, and the name Old Kentucky Home. During the negotiations, Reverend Myers asked that the business keep the name in honor of his wife’s home state. Other than a few brief times when Julia Wolfe subleased the house, the boarding house at 48 Spruce Street was known as the Old Kentucky Home.

The purchase of the boardinghouse did more than bring in income for the family; it also created an irrevocable split in the family. Mrs. Wolfe found it difficult to run her business from the family home on Woodfin Street and moved into her boarding house. Her youngest child, Tom, was forced to live amongst the boarders. For over a decade family members moved between the two residences, the daughters stayed mainly at the family home with their father, while the sons would shift back and forth between the two homes.

Although a strain within the life of the Wolfe family, the Old Kentucky Home did hold some fond memories as well. Wolfe fondly remembered the family and boarders gathering around the piano in the parlor while his sister Mabel would play and sing. W.O. would entertain the boarders and family with long rhetoric and recitations of passages from Shakespeare, Tennyson, and other. The boardinghouse even served as a venue for important family life events, such as the weddings of daughters, Effie in 1908, and Mabel in 1916. But not all the family events in the boarding house were positive. The boarding house was also where Tom’s brother Ben, died in 1918, and his father died in 1922.

Ten years after Julia Wolfe’s purchase, the boarding house in 1916 she undertook a sizeable expansion in order to accommodate more boarders. During the expansion, Mrs. Wolfe added a large sun-parlor, extended the dining room, included a small family dining room, added sleeping porches upstairs, along with bathrooms, and bedrooms of all sizes. in his novel Look Homeward, Angel Tom remembered his mother’s additions being as economical as possible.

“The construction was after her own plans, and of the cheapest material: it never lost the smell of raw wood, cheap varnish, and flimsy rough plastering, but she had added eight or ten rooms at a cost of only $3,000.” Look Homeward, Angel

Like the surrounding city, since its construction in 1883, the house at 48 Spruce Street changed to accommodate the tourism trade and expansion of Asheville. By reading Look Homeward, Angel one discovers the happiness and grief that once occurred within its walls, the history of a family and the city in which they lived, all stories that inspired one of America’s greatest 20th century authors.